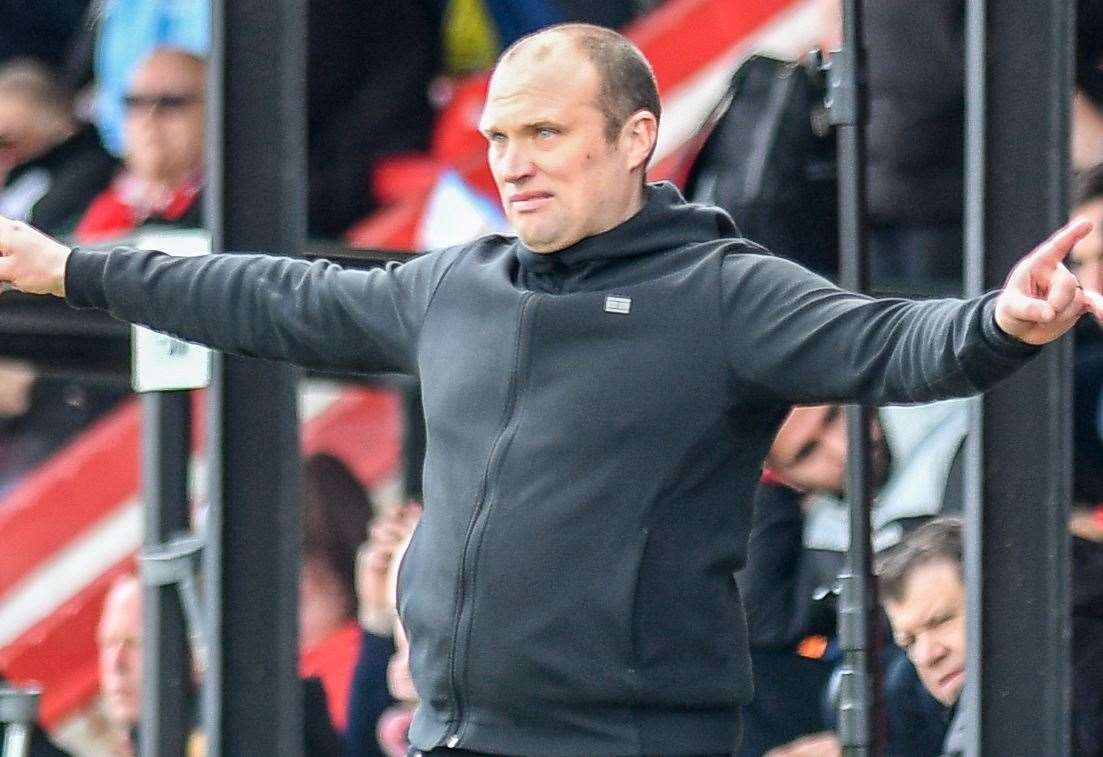 Welling boss Warren Feeney believes there is enough talent in his squad to avoid relegation.

The Wings are at the bottom of the National League South with just six games left.

They are only below Billericay on goal difference but Welling’s run-in is horribly difficult with games against five teams in the top nine to come, including games against top two Maidstone and Dorking Wanderers.

“The most important thing is belief and confidence,” said Feeney, whose side were beaten 4-2 by promotion hopefuls Ebbsfleet last weekend. “I told the players that if they had played like this last week, with no disrespect to Tonbridge, they would probably have gotten a result.

“But it’s easy to raise your game against the so-called big boys in the league.

“I think there are enough of them there, I think we’ve had a few injuries and if they show me that determination we’ll get results. We have to look at that, the teams we’re playing against are tough, but there are games we can get wins in. We have to get those boys back and go again.

“There’s pressure no matter where you are in football these days. I told the players it was a free kick, go ahead and enjoy it. I want them to play with the smile until the end of the season and if they do, we will win more games.

Feeney was given an incredibly difficult task at Park View Road. He replaced former England caretaker manager Peter Taylor last month but has won just one of his four matches in charge so far.

Despite the results, Feeney is enjoying his time at Welling and believes his players need to enjoy the final six games to have the best chance of success.

“I love it,” Feeney, 41, said. “They made me feel very welcome. I didn’t hesitate when I got the phone call. It’s a big challenge for me, but I’m not going to deprive myself of it.

“I was at Salisbury before in the Conference, so I know what it’s like, but I’m not one of those who has played a good level of football and is a big Charlie. I’m just a boy on a street in Belfast.

“When you’re out there it’s hard, but when you feel that little bit of joy it’s great. We have to keep the boys alive, you can’t get discouraged, you have to keep a cool head because that next week there is a chance to fix this.

“We have to make everything nice, but get our points across and cheer them on. The players know they made mistakes but we can’t be too hard on them because we are where we are for a reason.

“We have to try to turn it the other way, to make them feel better and for some parts of Saturday’s game you can clearly see that we did that.

” It’s going to be hard. We are where we are for a reason, like the other teams around us.

“It’s hard to win football games, but we have to stay in there, get them back, get a few injured players and get them going. I hope we pick up the results to get us where we want to be.

Feeney enjoyed a successful professional career with towns such as Bournemouth, Luton and Plymouth.

But he wants to keep the instructions simple and knows the Wings need to play percentages to have the best possible chance of avoiding relegation to the Isthmian premiership.

“If you put balls in the box, you score goals,” Feeney added. “Football is a simple game, it’s difficult when people try to complicate it. That’s not how I want to play, I want to play football well.

“But at the end of the day it’s necessary and I thought the way we competed (against Ebbsfleet) we put balls in the box and we got people defending.

“If you look at the majority of the goals, they are mistakes or set plays. But you have to have that desire to head the ball or go and score a goal. You can make set pieces until it rains, but if you don’t want to put your head in it…my boys have to be ruthless in both boxes.