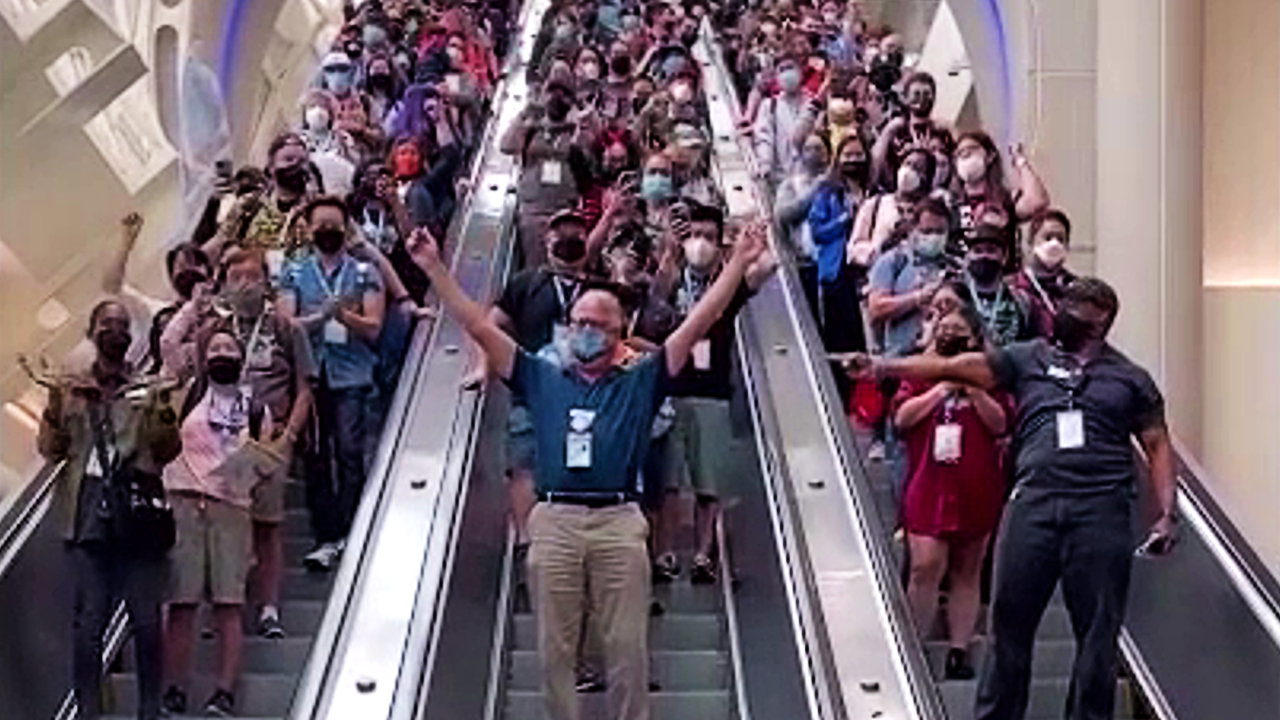 SAN DIEGO — Rolling past an escalator filled with cheering fans, Tim Pontrelli raised his arms in victory, a crowd of complete strangers chanting his name.

When he got to the bottom of the escalator, he quickly swerved away, leaving fans behind him pouring onto the floor of the San Diego Convention Center.

San Diego Comic-Con 2022 was underway and Pontrelli was back behind the scenes, where he helped make the mega-event possible for the past four decades.

The emotional retirement, captured on video and then shared online, was orchestrated by a security supervisor as the crowd waited to enter the convention, Pontrelli said later in a phone interview.

The supervisor spoke to the eager fans a bit about the event manager’s career. At the time of a last turn of the escalator, the crowd marked the occasion with its gesture.

Pontrelli said that “time kind of slowed down”, when he realized the group was chanting “Tim, Tim, Tim, Tim”.

“It was really sweet that they remembered my name,” he told FOX 5.

Pontrelli has been around since the days of Golden Hall hosting San Diego Comic-Con. He laughs as he recalls how he and other event staff were impressed with a turnout of a few thousand people.

“Ooh, that’s a big line,” he remembers saying, commenting on a line that stretched just one block to Third Avenue. It was a big crowd, no doubt. But at today’s event, you might be waiting longer for the bathroom.

Lines are actually a defining characteristic of Pontrelli’s career, he told FOX 5.

He cut his teeth at Golden Hall in the 1980s and eventually moved to the San Diego Convention Center, where he continued to play a key role in the production of Comic-Con.

By the mid-1990s, a transformation of the convention itself was well underway. No longer just a gathering of comic book collectors and graphic novel enthusiasts, the crowds have grown into the tens of thousands.

As the number of participants eventually exceeded 100,000, the management of the event became “a Rubik’s cube of line control and crowd management”.

The wait is only part of the process at such a massive event, but Pontrelli and his team always wanted to make it as painless as possible. He said it’s essential to make sure people are standing in the right line, because there’s nothing more devastating than a two-hour wait to reach the wrong door.

It’s also important to make sure people are standing in a true line in the first place. Yes, sometimes phantom queues appear in crowded aisles, leading nowhere at all.

“People will be in a mini line and we’ll be like, ‘What is this line for? ‘” Pontrelli said. Confused attendees will gesture to a destination with a queue that starts around the corner.

“‘You’re in a line to nowhere,'” Pontrelli said with a laugh.

As the event grew, so did the number of items on the event manager’s plate. It tries to manage the experience from the moment participants leave their homes or hotels, keeping traffic and transportation issues in mind.

He talks about the agencies he works with: the Port of San Diego, the city, the California Coastal Commission, the fire department and the police. Then there’s the team of 1,000 security guards and meeting room coordinators and a massive cleanup crew — the contractors and the production crews and the Hollywood PR crews.

Beyond Comic-Con, Pontrelli and his team have helped organize a dozen other major conventions each year. He also played a central role in converting the place into a homeless shelter and a safe haven for migrant children during the coronavirus pandemic.

“You could tell, in a way, that you were changing their lives,” Pontrelli told FOX 5. “A lot of them were very grateful.”

Work is rewarding in all its forms, he says. But there’s no denying that it can be grueling work.

Pontrelli has “the same ailments as a lot of event managers” by “hammering the pavement multiple times over the years.” Plantar fasciitis and bad knees come with the territory of 12 or 13 hour days during its busiest weeks of the year.

He is grateful for the support of his wife, Kerry, whom he met at the convention center. She’s worked in events, so Pontrelli says she understands the odd schedules and dizzying logistics.

By bidding farewell to Comic-Con, Tim marked another lasting milestone this year. He and Kerry have now been married for 24 years.