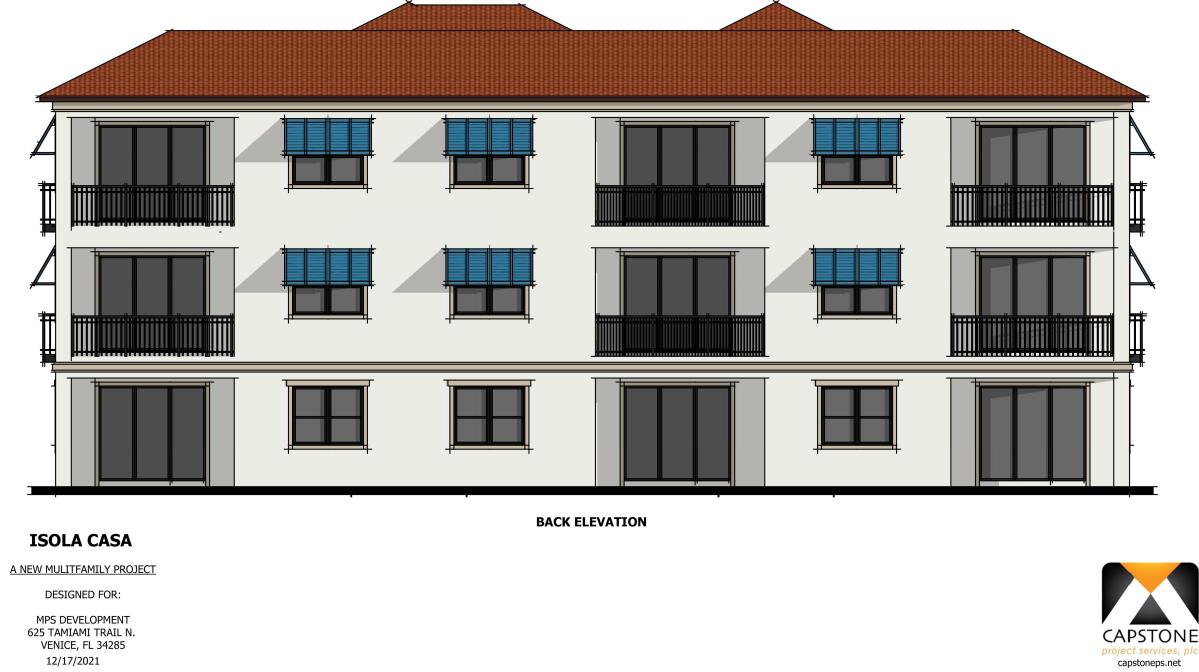 VENICE — Land on Venice Island, once considered as the site for a Four Points by Sheraton hotel, is now being considered by a local developer for a three-story, 36-unit condominium complex.

Planning for the proposed development, Isola Cassa, is still in its early stages, with MPS Development hosting a virtual neighborhood workshop at 5 p.m., February 16, on Zoom. The meeting code is 886 6249 3351; with a password of 912212.

The virtual workshop is one of the last steps a developer takes before formally submitting a proposal to the City of Venice for review.

Mike Miller, director of MPS Development & Construction LLC, said the 36 condominiums will be spread across four three-story buildings, with one-story garages lining the property east between the condominiums and single-family homes on Guild Drive.

“What we did was put the garages along the property line for a buffer,” Miller said. “We have already received a letter from a gentleman, he is so happy.”

Miller and Frank Cassata, his partner with MPS Development, hope to complete the purchase on two parcels, located at 775 S Tamiami Trail and 805 S. Tamiami Trail from DAUS Capital LLC.

Hotel developer Daniel Singh, who bought the property in 2015 through DAUS Capital, had hoped to build a 103-room, four-story hotel at 775 S. Tamiami Trail and provide parking for overcrowded employees and guests on Pine Grove Drive at 805 S. Tamiami. Track.

Earlier: The hotel project on the island of Venice suffers a setback

But the developer, who is said to have brought the city of Venice its first new hotel since 1997, has been unable to overcome public opinion against the prospect of a 42-foot-tall four-story structure adjoining houses single family.

The MPS Development would use a 0.78 acre parcel south of Pine Grove Drive for stormwater retention and develop the condominium complex, which would also include a swimming pool and cabana, on the 2.01 acre northern parcel at 775 S. Tamiami Trail.

The four condominiums would be oriented with balconies facing north or south, with only side windows facing east.

“It was sort of a no-brainer,” Miller said of the intentional orientation of the balconies away from single-family homes. “I laughed and Daniel Singh too.”

Related: Developers Cassata and Miller have several projects in the Venice area in play

The most visible at the moment is Porto Vista, which is located on the former site of Fisherman’s Wharf, on the west side of the KMI Bridge.

Prime Serious Steak recently opened on Cassata Square, which is located on the east side of Tamiami Trail between Venice and Miami avenues.

Isola Casa would be across from the Venice Municipal Mobile Home Park and around the corner from three-story Holiday Apartments condominiums.

Two of the units on each floor would be mirror images of each other, with 1,356-square-foot two-bed, two-bath units, with a kitchen, laundry room, and den, as well as a covered 90 square feet. veranda.

The base unit would be 952 square feet, two beds, two baths with a kitchen, an area with a stacked washer/dryer, and an 88 square foot covered lanai.

The price range has yet to be set, in part due to supply chain uncertainties.