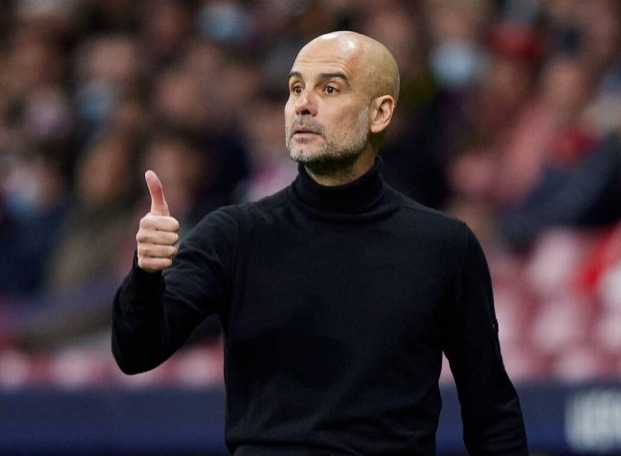 Pep Guardiola says Manchester City players needn’t be scared or worried in Sunday’s Premier League title showdown against Aston Villa if they stick to the game plan and focus on the game.

City know a win over Villa will put them ahead of Liverpool in the title race, with Liverpool hosting Wolves at the same time in the final round of fixtures.

Any mistake will see Liverpool snatch the title right in front of City’s noses, but Guardiola has told his side to “enjoy and suffer the moment” of trying to clinch the Premier League title.

“I told our players, it’s just a football match,” Guardiola said in his pre-match press conference. “Don’t think how happy or sad we would be, just focus on what we need to do to beat Aston Villa. To have one more title, or one less, is important but it’s only a soccer game.

“I have a feeling we’ll do things incredibly well. We haven’t been here many times in our history, but we must be anxious or nervous? Not at all. Just try to enjoy and suffer in the moment.

“Focus on will they play [Ollie] Watkins or [Danny] Ings or just Watkins. Douglas Luiz as starting midfielder in three or four [midfielders]? Does John McGinn move inside or outside. will they play [Phillipe] Coutinho and [Emiliano] Bundia together? That’s what we have to do to win the game.

Guardiola admitted City players could be feeling the nerves of having the Premier League title within their grasp with one game to go – and announced his side would not have any special pre-match arrangements until after the match. Sunday final.

“It’s hard to control your emotions,” he added. “They are human beings and there are concerns about what will happen if they [Villa] score. You may have to live with something that is uncomfortable, but you have to react as best you can.

“In football it’s not over until it’s over. Don’t give up and do what you did last month and go for it. What we are planning is just one game football, nothing different. “We are not going to do anything new, everyone will be at home before the game with the families. We are preparing the game to win against Aston Villa, and we are going to go to the plan to try to beat Aston Villa. No more than that. We can make theories, but it’s only a football game with 11 players and a good manager who will try to beat us.

What are the permutations of the title race on the final day?
Manchester City (90 points) have already won three Premier League titles on the final day of the season – in 2012, 2014 and 2019 – and could do so again this Sunday. Pep Guardiola’s men lead Liverpool by just one point. This therefore means:

Manchester City will win the Premier League if they beat Aston Villa on Sunday – or equal Liverpool’s result at home to Wolves.
If City draw Villa, Liverpool will be crowned champions if they beat Wolves.
Given their inferior goal difference, a draw would not be enough for Liverpool to be champions on Sunday should Manchester City lose by a seven-goal margin to Aston Villa. An unlikely Premier League title play-off is still possible, should Man City and Liverpool finish with the same number of points, goal difference, goals scored and goals conceded – with their head-to-head record head already level.

For this play-off to take place, Manchester City would need to lose 6-0 at home to Villa, with Liverpool and Wolves drawing 5-5 at Anfield.