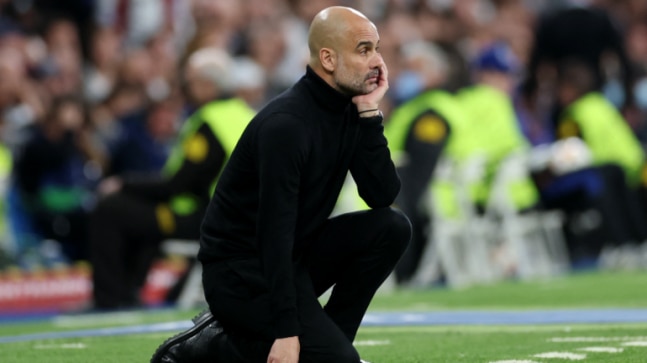 Manchester City manager Pep Guardiola has said his side will channel the pain of their Champions League semi-final defeat to Real Madrid into Sunday’s home game against Newcastle United.

Guardiola added that he hasn’t spoken to his players since Real’s stunning return in Wednesday’s second leg away to Madrid and nothing he says will be any consolation.

Premier League leaders City were two goals clear on aggregate but Real scored in the 90th minute and equalized a minute later before winning in extra time with a Karim Benzema penalty to set up a final against Liverpool in Paris.

Asked what he had said to his players since the loss, Guardiola replied: “Nothing. We haven’t spoken.

“No words can help (for) how we all feel,” he added. “It’s just a matter of time, try to sleep as well as possible and think about the new target.”

Guardiola said the league objective remains the same and he will speak to the players on Saturday about who they are as a team, what they have achieved and how they have played all season.

He, however, said he was unsure if the current squad could win the Champions League or if he was the manager to do so.

“Maybe I’m not good enough to help the team do that. Nobody knows what would have happened with other players or managers. For us, it’s an honor to be there as much as possible in all competitions,” he added.

City are a point clear of Liverpool at the top of the table but could be behind when kick off comes with the Reds hosting Tottenham Hotspur on Saturday.

“They (the players) must not forget it (Real Madrid’s defeat). How are they going to forget it?” Guardiola said.

“We’re going to play against Newcastle thinking about it, for sure. I know the players from training, meetings, warm-ups how committed they’re going to be, I have no doubts about that.”

Guardiola denied that Champions League success was the main objective of City owners in Abu Dhabi.

“It’s completely the opposite of what people think about it.”