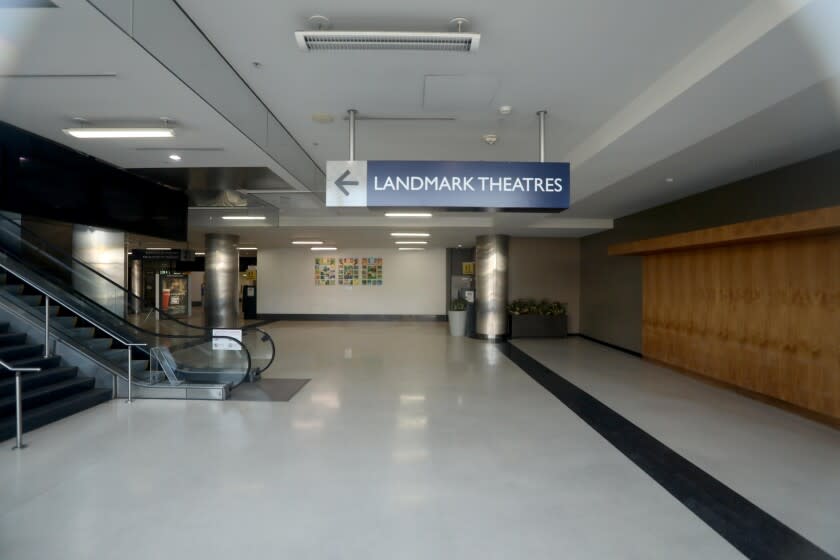 The Los Angeles-based exhibitor said Wednesday that the theater, frequented by moviegoers and known for hosting Q&A screenings with top filmmakers, will close when its lease expires at the end of May. The announcement comes after the company failed to reach a settlement with its owner, Landmark Chairman Kevin Holloway said in a statement.

“For months we worked to extend our lease of The Landmark Pico, but we couldn’t come to terms,” Holloway said. “We extend our deepest gratitude to Pico staff, guests and the film community for their support over the years. We are exploring opportunities to expand our footprint in Los Angeles, which we hope to be able to share more about soon.

Located in the Westside Pavilion, the Landmark Pico location, usually referred to simply as the Landmark, has long served as a destination for Westside arthouse moviegoers. If a new movie was playing in a theater in Los Angeles, chances were it was playing at the Landmark.

ArcLight Cinemas and Pacific Theaters announced in April 2021 that its locations, including the famous ArcLight Hollywood theater and the adjoining Cinerama Dome, would not reopen. The announcement sparked a flurry of emotions from famous directors and a public campaign to bring the Dome back to life.

Although several former ArcLight and Pacific sites have reopened under other operators, the Hollywood Theater and the Dome remain dark. Rumors spread at the end of 2021 that the Dome and adjacent theater would reopen under a different name as early as this year, but 2023 is more realistic, sources say.

The Vista Theater in Los Feliz has been closed since March 2020, and although it was acquired by “Pulp Fiction” director Quentin Tarantino, no reopening date has been announced.

Landmark will continue to operate its other Los Angeles locations: the soon-to-be-renovated Nuart Theater and the newly renovated Landmark Westwood, the company said. Landmark Theaters has 35 locations with 195 screens in cities including San Diego, San Francisco, New York and Dallas.

Specialty theaters like Landmark, which play a mix of Hollywood blockbusters and arthouse fare, have struggled to recover from pandemic closures. In Los Angeles, movie theaters have been closed for a year, straining the finances of beleaguered multiplex operators.

Older patrons who make up the bulk of ticket buyers for character-driven indie films have been the slowest to return, even as Hollywood cashes in on the spoils of blockbusters such as ‘The Batman’ and ‘Doctor Strange in the Multiverse. of Madness”.

A24’s original multiverse action-comedy “Everything Everywhere All at Once” has given specialty theaters a boost, generating more than $40 million in domestic box office sales. Focus Features’ “Downtown Abbey” sequel could also attract older crowds who haven’t yet returned to auditoriums.

But smaller movie chains have struggled to survive in part because of competition. In Los Angeles, even the biggest multinational chains like AMC Theaters and Regal play the kind of small films that are usually the bread and butter of Landmark and the Los Angeles theater chain Laemmle.

The chain was previously owned by Dallas Mavericks owner Mark Cuban and his longtime business partner Todd Wagner. They acquired the chain in 2003 from Los Angeles-based asset manager Oaktree Capital, which had rescued the exhibitor from bankruptcy.