Ice cream topped with a toasted marshmallow from Hello Honey

Cincinnati’s food scene heated up in July, from the opening of a new ice cream shop in northern Kentucky to the announcement of upcoming dining concepts. We said goodbye to some classics like the Over-the-Rhine location of Holtman’s Donuts and Uncle Mo’s Cafe downtown. On the bright side, Cold Spring now has a sushi conveyor belt and Northside is getting a new coffeeshop. Salazar and Deeper Roots are collaborating on a bodega-inspired concept slated to open in August, and Dean’s Mediterranean Imports has announced a new dining concept coming soon to Northside. Read on for more food news from Greater Cincinnati.

Hello Honey Newport Location
Cincinnati-based artisan ice cream shop and bakery, Hello Honey, has added another location to its growing dessert empire. Located in Fort Thomas, Hello Honey’s new location opened July 16th. Co-owner Brian Nicely and his wife Nitima started serving their homemade desserts in small batches on Vine Street downtown in 2012. Hello Honey is known for its creative combinations of dessert flavors. , made with fresh ingredients and no artificial flavors or colors. If you’ve never been there before, it’s a must that you top your ice cream with one of their homemade vegetarian marshmallows (yes, the standard marshmallows are made with gelatin and therefore not suitable for vegetarians). 18 N. Fort Thomas Avenue, Fort Thomas, hellohoneyicecream.square.site.

A new Northside coffeeshop will soon combine two of the neighborhood’s favorite things: craft coffee and great music. The Newport stream hosts the grand opening of its second location at Liberty Exhibition Hall on July 31, featuring the brand’s brewed coffee and a hand-built live music speaker system. flow opened in Newport in February 2022 in a shared space with plant store Fleurish Grounds. The Northside coffeeshop will also be a symbiotic operation in concert with the Liberty Exhibition Hall arts theater and its adjacent retro-themed bar, The Lounge. flow will serve its coffee and kombucha, as well as cocktails using both ingredients. 846 Monroe St., Newport and 3938 Spring Grove Ave., Northside, facebook.com/flowfuturecoffee.

Have you ever eaten sushi delivered by conveyor belt? It is now possible without having to book a flight to Tokyo thanks to Arawan Thai Sushi, located in Cold Spring. The northern Kentucky restaurant known for its Thai and East Asian cuisine reopened July 14 following a temporary dining room closure. The restaurant recently celebrated its second year of serving the community and, in addition to the conveyor belt, also added what they call “SuShef”, a robotic sushi maker that spreads rice on seaweed sheets before the sushi chef fills it with protein and vegetables. , then “SuShef” concludes. 56 Martha Layne Collins Blvd., Cold Spring, arawanthaisushi.com.

Holtman’s Donut Shop Over-the-Rhine Location
Iconic Cincinnati donut shop Holtman’s Donut Shop closed its Over-the-Rhine store on July 24. The family-run donut shop has been around since the 1960s and has operated its Vine Street store for nine years. “This decision was the hardest decision we have ever had to make. Thank you for your support, your love for our passion and your business,” read the announcement on Facebook. No specific reason was given for the closure. Holtman’s has four other locations in Loveland, Oakley, West Chester and Williamsburg. holtmansdonutshop.com.

Uncle Mo’s Cafe, a Greek restaurant that served gyros and shawarma downtown, has closed permanently. A sign stuck to the front of the restaurant in late July announced that the cafe had closed due to the sale of the building and the tripling of the rent. “We thank you for all these years of support and you will be truly missed! read the note signed by Uncle Mo and Aunt Carrie. 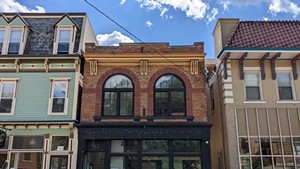 Two Cincinnati food and coffee favorites come together to bring a bit of the Big Apple to Queen City. Chef Jose Salazar and his restaurant group JPS and Deeper Roots Coffee have partnered to open Daylily, a New York-inspired bodega and deli in Columbia Tusculum. “Jose and (his wife) Ann Salazar grew up in Queens. They grew up in bodegas in New York and there’s no New York-style bodega in Cincinnati. It’s something they crave. been a long time and they couldn’t scratch that itch. So they were like, ‘Let’s go. Let’s bring one to Cincinnati,'” Daylily General Manager Sami Stewart said. The project’s opening date is early August and hours are expected to be 7 a.m. to 7 p.m. daily. 3751 East Ave, Columbia Tusculum, daylilydeli.com.

The owner of Dean’s Mediterranean Imports has announced the opening of a new concept in Northside
Some of the Findlay Market flavor will soon be making its way to Northside. Kate Zaidan, owner of Dean’s Mediterranean Imports, is set to open a new restaurant at 4024 Hamilton Ave. “Our new concept will transport our customers to our ancestral home in Lebanon, where delicious cuisine and hospitality reign,” she said in a statement. “We will host a unique dining experience in Cincinnati, reminiscent of the ancient souks of the Middle East.” Construction is expected to begin soon, with a goal to open by summer 2023. instagram.com/northsidenest.

Reader’s Digest named Price Hill Chili the “Best Traditional Restaurant” in Ohio
Reader’s Digest has been around since 1922, so when the publication lists the “Best traditional restaurant in every state,” it is logical to believe that he knows what he is talking about. And what better state food to represent Ohio than Cincinnati-style chili? Reader’s Digest named Price Hill Chili as the most traditional place in the Buckeye State, emphasizing the 3-Ways (4-Ways and 5-Ways) of the chili parlor as well as its chili dogs and sandwiches at chili cheese. The post also gives a nod to WhoDey’s hometown favorites, listing Price Hill Chile’s Golden Fleece Lounge as a great place to catch a Bengals game. 4920 Glenway Ave, Price Hill. pricehillchili.com.

Send CityBeat a news or tip or submit calendar event.