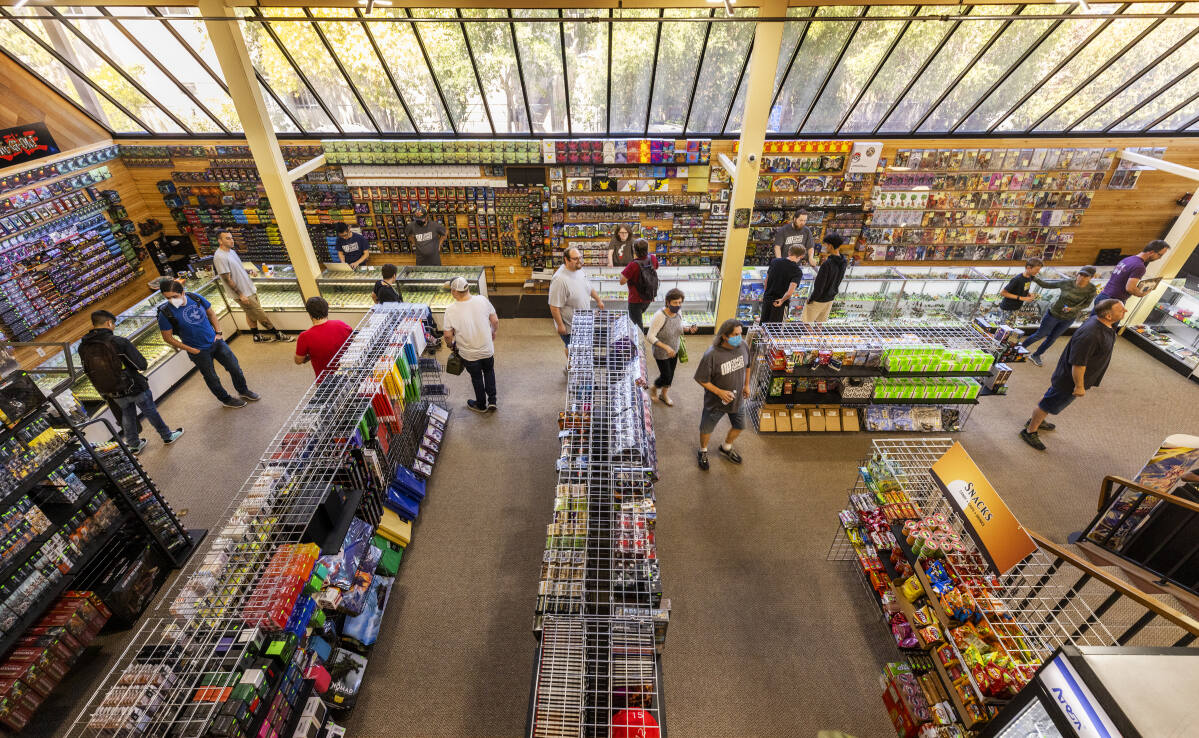 With growing interest in games like Magic: The Gathering and Dungeons & Dragons, Outer Planes Comics and Games in Santa Rosa realized it needed more space.

After a decade located downtown, Outer Planes Comics and Games – which now operates as OP Comics & Games – welcomed customers to its new, larger location near the Coddingtown Shopping Center on Friday.

The store mixes an extensive catalog of new and old comic book issues with a range of board games, trading card games and single cards for popular fantasy games such as Magic: The Gathering, which has attracted dozens of millions of players worldwide since its release in 1993.

The store also hosts board and collectible card games and tournaments in its massive second-floor gaming space, featuring an open-concept arena of tables and individual rooms for private events.

“A lot of people really need a place to hang out sometimes during the day and we like to provide that,” said Lauren McCormick, General Manager of OP Comics & Games.

Located at 1901 Cleveland Ave., the store is nearly 9,000 square feet, compared to approximately 5,000 square feet at its location on Mendocino Avenue and Seventh Street, where the store had stood for 11 years. This location is now closed.

“A lot of friendships are made over games, it’s a social gathering,” McCormick said. “People who play RPGs (role-playing games) and card games like Magic or Pokemon are the most outgoing people that come into the store.”

While the old store’s smaller space meant gaming events had to be limited to around 80 players, the new store’s second-floor space can accommodate around 150 attendees, making OP Comics & Games one of the of the largest such stores in the state, according to McCormick.

Five years ago, Outer Planes Comics and Games owner Dan Radovic first looked at the space on Cleveland Avenue, which once housed a piano and organ shop, but to no avail. In 2020, he began renting space in his downtown shop from James Palmer and Sean Quattrin, owners of online and in-store MTG Lifestyle, which specializes in selling unique cards for Magic: The Gathering.

The two companies merged in January to form OP Comics & Games LLC. Radovic, Palmer and Quattrin reviewed the Cleveland Avenue location again and signed a lease in March. They have spent the last two months renovating the interior of the building.

The store’s three owners and staff were busy Friday helping hundreds of customers. At 2 p.m., several card games were already starting on the second floor.

Josh Miller and Matt Gayda, both of Santa Rosa, were two of the first players to christen the new gaming space.

“I love the open floor plan, I love that we’re above and can see everything,” Miller said.

“The old place looked a bit like a fishbowl,” Gayda said. “But it has a view and feels like a playroom, I really like those private rooms too. If you have kids, you can put them in a room and let them go crazy and they won’t bother anyone else.

“This place is amazing,” said Scout Boese, seated nearby. “Looks like this open space is going to invite a lot more people to consider coming here.”

For curious new customers, the store hosts events and tournaments for games ranging from Dungeons & Dragons to the Japanese card game Yu-Gi-Oh! almost every night of the week.

This weekend, OP Comics & Games continues its grand opening celebration with plenty of games and comic book sales. The store is also home to pop-up caterers Second Staff, who will be outside the store selling Korean fried chicken “Rage Cage” from 4 p.m. to 9 p.m. — or while supplies last — until Sunday.

“It took a lot of long days to get this up and running, but today is going to be a great day,” McCormick said.